The Atlanta Falcons will welcome the Tampa Bay Buccaneers this Sunday in the season opener for both teams.  The Falcons finished last season with an 8-8 record in the NFC South, which was an improvement from their 2014 6-10 record but still not anywhere near where they wanted to finish after starting 5-0.

The Falcons go into the season with one of the toughest schedules in the NFL but quarterback Matt Ryan thinks that if the defense can hold, he has enough weapons on the offensive side of the ball to get into the playoffs and beyond.

“We have to create some explosive plays,” Ryan said. “We are getting the ball down the field a little bit and that will help us 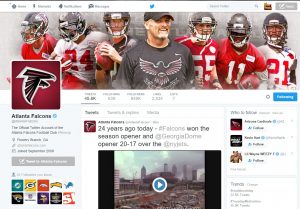 out. We have to be a little bit more consistent. There is no question about that.”

Coach Quinn also announced that rookie linebackers Deion Jones and DeVondre Campbell will start against the Bucs.  Coach Quinn also stated that OG Chris Chester has won his position and will again get the start at right guard.

As for the schedule, coach Quinn seemed more excited then weary of the schedule that has three of first four games divisional matches.

“It’s going to be awesome,” Quinn said. “I love the way that the league has set that up where three of the four are right off the bat. It’s an area we didn’t do a good enough job last year. We struggled against our very own division, which is a tough one.”

Tickets for the game and all your regular season games are on sale now.  Get yours today and help cheer on your Atlanta Falcons over the Tampa Bay Buccaneers!