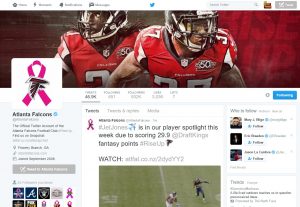 After slogging through a less than perfect first half but happy to be down by only  11 points, the Atlanta Falcons carved up the undefeated Dallas Cowboys with the combination of Ryan to Jones in the air and Devonta Freeman, who had 141 yards on the ground.  The Falcons held the Cowboys scoreless in the second half while posting 22 points of their own and besting the Cowboys 39-28.

“We just want to move the ball — I don’t care how we do it,” said Freeman, who also picked up 52 yards receiving yards. “Run, pass, if we get three points on a field goal, as long as we move the ball and get points.”

The Falcons must now prepare to host the Houston Texans, who are coming off a 19-9 win over the Buccaneers.  Plenty of affordable tickets and great seats are still available so be sure to get yours today and help cheer on your Atlanta Falcons!

Julio Jones came prepared to play and it showed in the Falcons 24-20 win over the New York Giants.  Jones caught 13 passes for 135 yards leading the Falcons to their second straight victory.

The win over the Giants sets up an  early battle of undefeated teams as the Dallas Cowboys host the  Falcons this Sunday.  Plenty of great seats and affordable tickets are still available so be sure to get yours today and help support your Atlanta Falcons!